Thomas W. Current
COL (R) US Army Reserve
President, Lynchburg Area Veterans Council (LAVC)
Lynchburg Area Veterans Council (LAVC) announces the 77th Anniversary of the heroic actions of Lynchburg native and Medal of Honor Recipient Desmond T. Doss on Okinawa in World War II on May 4 -5, 1945.
LYNCHBURG, VA – LAVC. It was on the night of May 4 and into the early morning hours of May 5, 1945, that Lynchburg native Desmond T. Doss performed many of the heroic actions that are depicted in the movie “Hacksaw Ridge.” The last two sentences of his Medal of Honor Citation read as follows: “Through his outstanding bravery and unflinching determination in the face of desperately dangerous conditions Private First Class Doss saved the lives of many soldiers. His name became a symbol throughout the 77th Infantry Division for outstanding gallantry FAR ABOVE and beyond the call of duty” (emphasis added). LAVC asks everyone in the Lynchburg area to stop for a moment on Thursday, May 5, to honor and remember the service and sacrifice of Desmond T. Doss and others from America’s greatest generation. 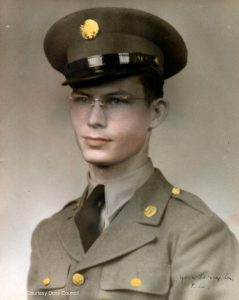