Named in honor of Desmond Doss, Congressional Medal of Honor winner for his heroics during World War II at the Battle of Okinawa at Hacksaw Ridge, our school recognizes the history of Desmond Doss and celebrates 95 years of Christian education at Desmond T. Doss Christian Academy!

With a desire to provide a Christ-centered education for students, when Elder E.A. Manry became the pastor of the Lynchburg Seventh-day Church in 1921, a church school was founded. Ms. Blanche Ralls was its founding teacher. The school operated continuously until 1933, at which time it went dormant until 1944. The school was restarted that same year and has been in continuous operations since.
By the early 1980’s, the church family, which was currently having services and school classes at a location on Park Avenue, was beginning to sense that God was calling them to relocate to a property that would allow better positioning for growth in the church and its ministries—especially its school. Ten acres of land were secured off of Route 29 on the South end of town. 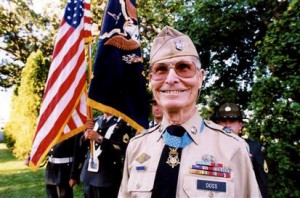 The name chosen for the newly relocated school was Desmond T. Doss, in honor of this long-time Lynchburg Seventh-day Church member and also World War II Medal of Honor winner, whose heroism and spirit-filled life is a model for future generations of students. After renaming the school in his honor, Desmond visited our school three times before his death to share his story of God’s amazing miracles during the Battle of Okinawa at Hacksaw Ridge, and he made presentations to our students of how he used a bowtie knot to lower upwards of 75 men to safety as God allowed Desmond to go out on the battlefield over and over and over again to find more men and rescue them—even though Doss was completely unarmed and under fire. As stated in the documentary, The Conscientious Objector, it is said of Desmond Doss, “Not all heroes carry weapons. Some choose only to carry their faith.”
You can learn more about the history of Desmond Doss and his heroics during World World II, especially during the Battle of Okinawa at Hacksaw Ridge, at the following links: