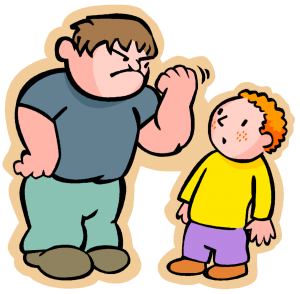 Jack, a slight sixth grader, rounds the hallway corner and sees a group of older boys centered in the middle of the next hall. He turns back quickly, trying not to make eye contact with the group and heads down the hall he’d just walked.

“Hey, Johnson,” says one of the group.  “Where do you think you’re going?”  Too late — he’s been seen.  The last time they’d seen him, they took his lunch money.  This time, he ducked into Mrs. Greene’s class — his teacher last year (“Justto say hi”) — as the group passed.

Lately, Jack has avoided everything about school.  He used to want to ride the school bus, participate in school activities and hang out with his friends.  But not lately.  He’s “lost” a couple of personal items and his clothes are torn once in a while.  Normally a good student, he’s missed assignments and become “lazy” about school work.  He doesn’t tell anyone about the threats and “hits” at school — in fact, he doesn’t talk to anyone much anymore.

When he goes to school, he returns late because he takes “a detour” out of his normal way (a detour that makes no sense).  More disturbingly, he complains that he “can’t sleep” at night and when he does, he has frequent nightmares.  He’s depressed and has even had thoughts of suicide from time to time.

These changes in Jack’s behavior point to one thing:  He’s being bullied.

Unfortunately, Jack’s situation is not unusual.  In fact, a recent government study revealed that 1 out of 4 students (both boys and girls) have been bullied in the last year,nearly 1 in 3 have reported bullying or being a target of a bully, and more than 1 out of 3 have seen hate-filled graffiti in their public school in the last 12 months.

There are many tell-tale signs that a child is being bullied.  Do you recognize any of these behaviors in a child you know?

Sadly, the long-term effect of being bullied extends all the way into adulthood, where formerly abused children have more depression and lower self-esteem than non-abused adults.  Many formerly bullied children end up angry and bitter as adults. Dr. Mark Dombeck, a psychologist who was bullied as a child, sees the following as long-term consequences of being bullied as a child:

No school is perfect, to be sure.  However, no child should be threatened, harassed or intimidated at school.

What can parents like you do to help students?  Are there any choices?

Experts who have studied bullying recommend a curriculum that emphasizes kindness, communication, cooperation, empathy, and friendship.  Schools should adopt a moral stance against bullying, school-wide.  Additionally, students should learn how to control their anger, how to solve conflicts, how to apologize, and how to reconcile.  Parents who are involved and close adult supervision are also important factors that deter bullying.

Christian schools teach these important lessons… Desmond T. Doss Christian Academy teaches these important lessons — and we have done so for years.  Small class size means teachers are more involved with students and parents are generally more connected to the school as well.  In addition, the multi-grade activities and learning opportunities we offer at DTD foster positive relationships between students of all ages.

Studies show that parents who send their children to private schools (largely Christian schools) are more satisfied with their child’s schools. These schools are considered safer, and they foster a supportive family atmosphere where teachers and parents know what’s really going on.

If you want to learn more about the safe environment that we strive to offer, contact us via the online form or call 434-237-1899.