Runners, walkers, supporters and veterans from across the country gathered under the threat of heavy rain in Lynchburg, Va. on Sunday, October 8 for the first annual Desmond T. Doss Fun Run and Walk in honor of the celebrated American hero. Doss, who grew up in Lynchburg, was a corporal in the United States Army and a conscientious objector who served as a medic during World War II and was awarded the Medal of Honor for his bravery.

Billy Wright, race coordinator and assistant principal at the Desmond T. Doss Christian Academy, says the race was the fulfillment of a 10-year dream.  “This race provides us with a rare opportunity to share with our community the God that Desmond Doss served and to financially support the school that bears his name. While Doss prayed for God to help him ‘save just one more,’ our prayer is through this race we will continually be able to reach one more student.”

During the opening ceremony, Desmond Doss, Jr., read the Medal of Honor citation presented to his father by President Harry Truman in October 1945. It was an emotional moment as he concluded the reading by asking the crowd, “What are we going to do to help someone today?” This question referenced his father’s heroism as a medic, when over a period of five hours Doss single-handedly saved the lives of 75 fellow soldiers while under heavy enemy fire from the Japanese during the Battle of Okinawa.

Proceeds from the inaugural race were shared between the Desmond T. Doss Christian Academy and the Lynchburg Area Veterans Council. Organizers also sponsored a Doss race in Chattanooga, Tenn. on October 15 and additional races are being planned in California, Washington, DC and China.

Doss was the subject of the acclaimed 2016 movie, Hacksaw Ridge, directed by Hollywood actor, Mel Gibson. For more information on the heroic story of Desmond T. Doss visit: www.desmonddoss.com 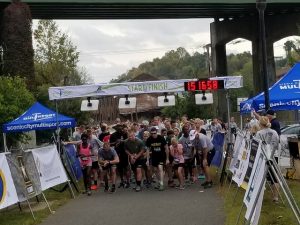 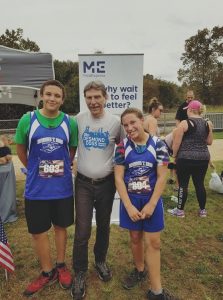