This past Veterans Day was an exciting time for students at Desmond T. Doss Christian Academy. Mr. Wright’s 9th & 10th graders volunteered at the National D-Day Memorial in Bedford, Virginia, as it got ready for its Veterans Day service. The students helped prepare the grounds for the upcoming ceremony honoring veterans. Mr. Wright’s students then attended a moving ceremony where they were able to meet and speak with a number of our veterans.

One of our students, Brandon Kirk, was photographed by our local newspaper as he spoke with Veteran Bill Alexander, who served in the Pacific with the U.S. Navy as a machinist. When we asked Brandon about that conversation, he told us, “Mr. Alexander told me that he was in the Navy and that he took part in six invasions in the Pacific. I also spoke with another veteran who was an airplane mechanic during World War II, and he said that he fixed over 1,000 planes during the war, including fighters, reconnaissance aircraft and bombers.”

Back at our school, the other students celebrated Veterans Day in various ways. For instance, the elementary students colored pictures that said thank you to the veterans, as they learned about honoring veterans. The 7th and 8th grade students were treated to a visit from a World War II Veteran, Mr. Marvin B. Pelle, Jr. Mr. Peele shared with the students that he was in the Pacific Theater and was part of the military campaigns on the Islands of Saipan and Okinawa. It was an honor to hear Mr. Peele tell about his experiences during both of these major battles from World War II. If you would like more information on Mr. Peele’s story, you can read the article about him in The News & Advance written by Katrina Koerting.

Also, earlier in the week, the 7th and 8th graders visited the Lynchburg Museum. While there, we photographed the display about our school namesake, Desmond Doss, who was a Congressional Medal of Honor winner from World War II. Desmond Doss, like Mr. Peele, also served in Okinawa. Desmond’s now famous story called Hacksaw Ridge took place at the Battle of Okinawa. You can read more about Desmond Doss here. (Note: After clicking the link, scroll down the page to see all the posts about Doss.)

It is a priority for our school to teach our students the importance of honoring veterans, so we are grateful for all of these opportunities that we have had this week for our students to learn more about these precious people and their stories.

The staff, families, and student body of Desmond T. Doss Christian Academy would like to thank every service member, past & present, for his or her dedicated service to this great nation. 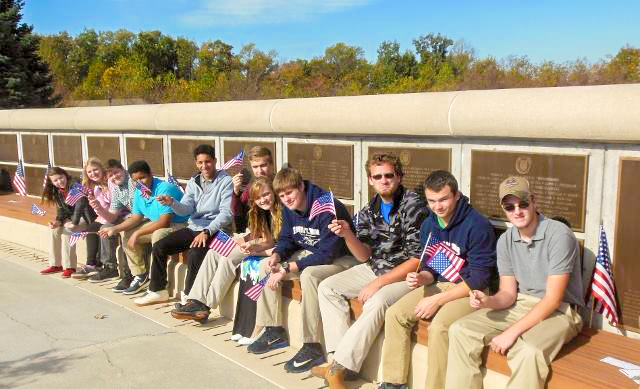