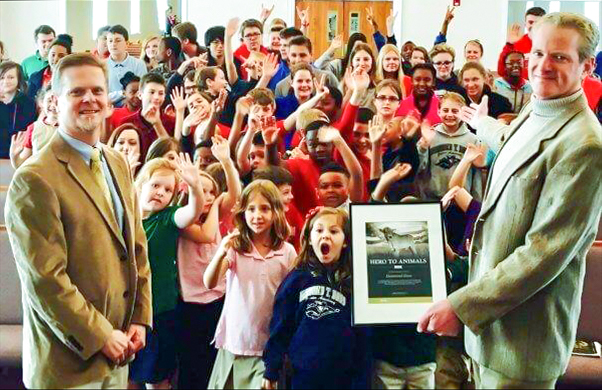 We continue our ride on Desmond’s amazing story. What a blessing it has been to be part of this at the school Desmond gave his name. On February 7, which is the date of what would have been Doss’ 98th birthday, the Desmond Doss PETA award presentation was made at our school with all of our students in attendance. It was presented by PETA’s Senior VP, Dan Mathews.

PETA is an animal rights agency. The group chose to award Desmond Doss the “Hero to Animals” award posthumously because, in addition to refusing to pick up a gun while in the army and throughout his life, he was also a lifelong vegetarian.

Desmond Doss is now a well-known Lynchburg hero because the story of his heroics during World War II were featured in the 6-time Oscar-nominated movie Hacksaw Ridge directed by Mel Gibson. Here is a photo of the Desmond Doss PETA award. 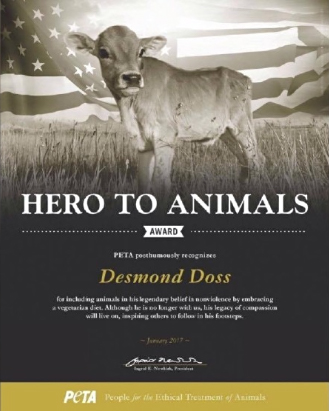 The following is a story about the details of the presentation was written by Michelle Kretzer—‘Hacksaw Ridge’ Real-Life Hero Desmond Doss Receives PETA Award.’

“The gripping WWII drama Hacksaw Ridge tells the extraordinary true story of American Army medic Desmond T. Doss, who saved the lives of 75 men during the war’s bloodiest battle, the Battle of Okinawa, without firing a single shot or even carrying a gun. Doss is the first conscientious objector ever to be awarded the Presidential Medal of Freedom. And now, on his birthday, he’s being honored by PETA with a posthumous Hero to Animals Award for including animals in his legendary views on nonviolence by embracing a vegetarian diet. 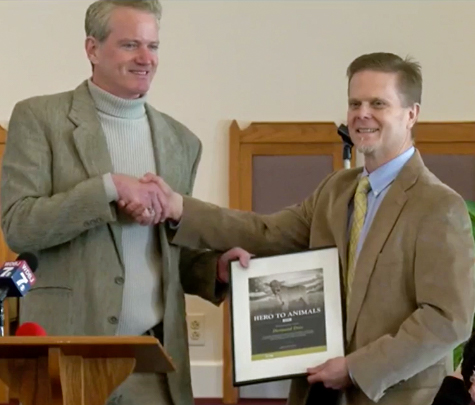 Here are some links of the news coverage (wdbj7 includes video) of the event: