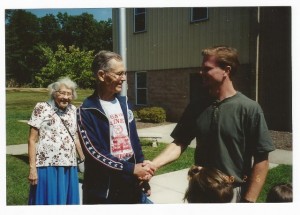 Congressional Medal of Honor recipient, Desmond T. Doss, visited our school on three different occasions throughout the late 1990’s and early 2000’s before his death in 2006. Mr. Doss always inspired the students and staff with his stories of valor and faith.

Principal Steve Doss, no relation to Desmond, remembers one particular visit in the late 1990’s where Mr. Doss came in his World War II uniform and demonstrated to everyone how he had tied the bowline knot he had use to lower 75 wounded soldiers off of Hacksaw Ridge during the battle for Okinawa.

“It was a real privilege to have Mr. Doss come to our school and speak with the students about the values he embodied and that we try to replicate in the culture here at DTD,” stated Principal Doss. 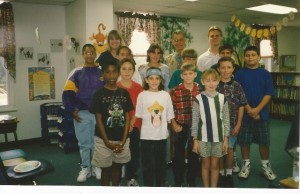 The award winning documentary “Conscientious Objector,” depicting the heroics and values which Desmond T. Doss lived by, can be checked out from the school. Principal Doss said, “I have been told that in 2016 a major motion picture ‘Hacksaw Ridge’ chronicling Desmond’s story will be released. The movie will show the intersection of Desmond’s patriotism and his personal faith.”